Haidar Soleimani, a refereeing expert, told Tasnim Sports Reporter about refereeing mistakes in the 21st season of the Premier League: “The Football Federation must have a serious determination to bring VAR technology to the Premier League, otherwise our referees will be eliminated from the first level of Asian and World Games.” The envisaged hosts for Iran will disappear.

He continued: “According to our research, in 115 games of the 21st league, we needed the technology of video referee assistance.” This number, of course, reaches 124 with the 6 players who had to be fired. Thus, more than half of the league games could be affected by the VAR.

The refereeing expert noted: “Our referees in the international arena will be in danger of being eliminated due to the lack of this technology, just as our referees are not given important Asian games due to the lack of VAR.” Recently, we saw that the Iranian referees judged in the preliminary stage of the Asian Champions League, and in the next stage, they will not judge because of this technology.

Soleimani reminded: the absence of VAR in 39 Premier League games has had an indirect effect and deprived the attackers and teams of good opportunities, if these opportunities could have helped to beautify the matches and increase the goals, or in dismissing and not dismissing players. Help the judges.

The teams that have suffered the most from the lack of a VAR:

The position of the teams in terms of the benefits they have gained from the absence of VAR is as follows:

The chart below shows the impact of the absence of VAR in the Premier League and the profit and loss of the teams in this regard.

Soleimani stated: ‌ The absence of VAR in 76 games has a direct effect on the result of the game and has been seen in 2 cases. In the first case; Healthy goals scored but erroneously declared offside or error. In the second case, the goal was scored in error or offside, which was accepted by the refereeing team. In this sector, the Arak Aluminum team has suffered the most losses and the Abadan Oil Industry has benefited the most. 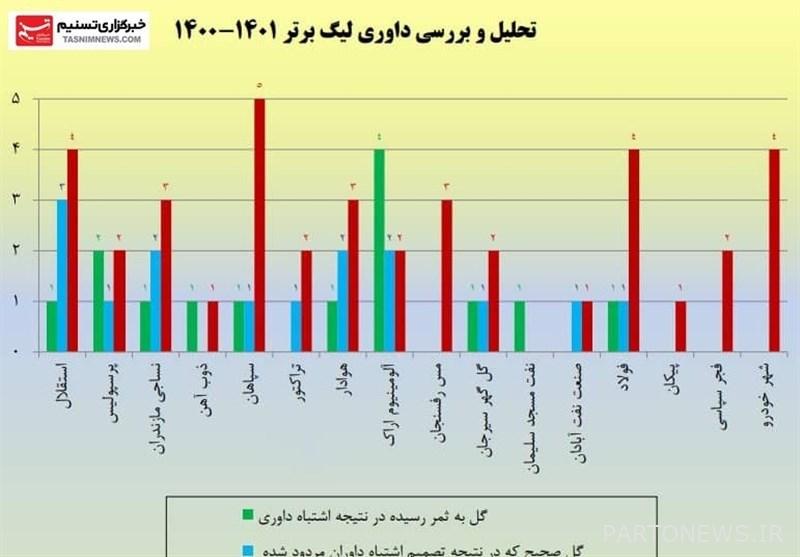 He pointed out that the biggest mistake of the referees in the penalty area is related to penalties, he said: This issue is divided into three parts. Part 1: In 5 cases, the referees in the penalty area did not recognize the errors as a penalty or did not see the scene correctly, which was the biggest part of the teams’ protest, and despite the VAR, this problem could have been solved. Part II; There are penalties that were wrongly announced by the referees and the teams took advantage of them, which can be a good statistic for the whole season. third part; In 2 cases, the teams suffered from the announced penalties and lost points.

Arak Aluminum and Sirjan Gol Gohar suffered the most losses in the penalty area, but the referees did not see the 5 penalties of these teams and a penalty was taken to their detriment.

The extent of the teams’ mistakes in the scenes that took place in the penalty area is shown in the chart below: 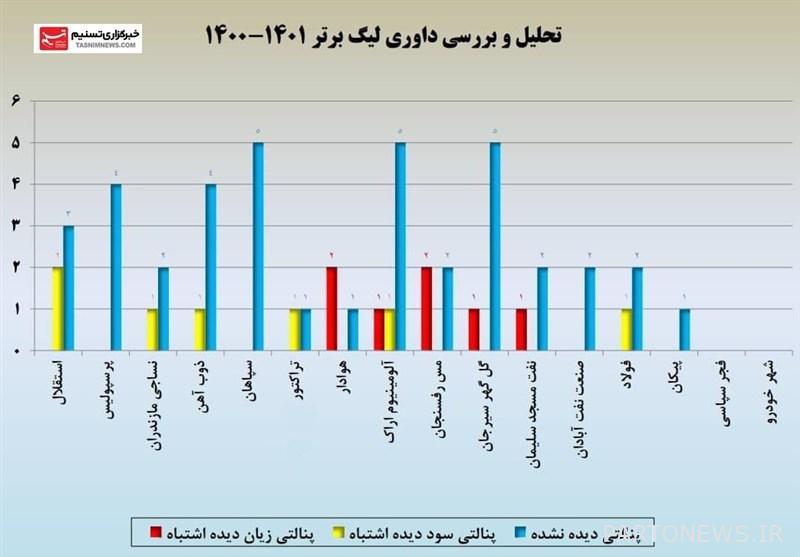 The football refereeing expert said that the number of yellow cards given to players was more than usual compared to European leagues. Lack of favorable interaction between the technical bench and the referees has increased the number of players’ cards and these cards are not a deterrent. Meanwhile, Golgohar Sirjan, Sepahan and Sanat Naft have the highest number and the lowest card has been awarded to Arak Aluminum team.

Masoud Shojaei from Nesaji with 10 yellow cards received the most cards and the most red cards were given to Talib Rikani (Abadan Oil Industry), Mohammad Hossein Fallah (Peykan) and Hadi Mohammadi (Tractor) with 6 red cards. In the same section, 4 other players could be fired using VAR technology, which is not included in the chart. In the meantime, the highest number with 3 players belongs to Esteghlal, who should have been fired.

خبر پیشنهادی:   We want 2 more players/ the second leg must be without spectators

In the diagram below you can see the number of yellow and red cards. 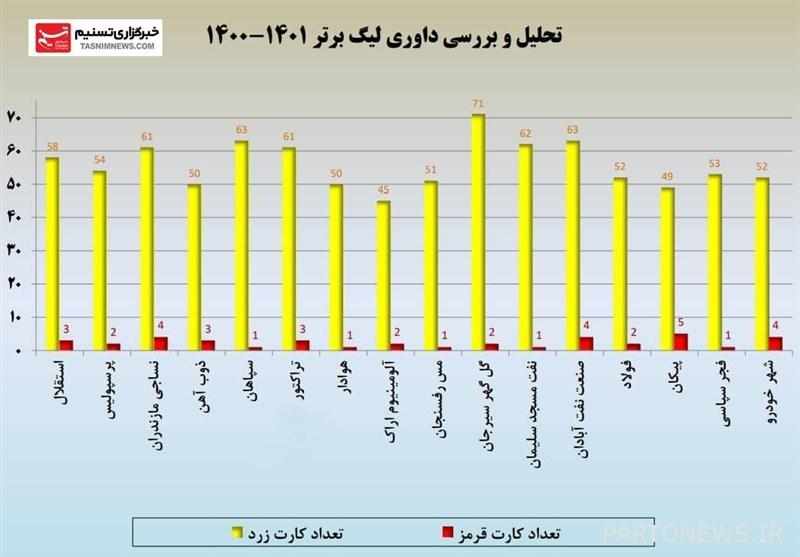 Soleimani, stating that the main criticism of a season of Premier League football references goes back to the refereeing committee, noted: The policies of the refereeing committee were followed incorrectly and there was no specific and uniform procedure. The differences between the department and the jury were quite obvious, and the refereeing arrangement was done without studying the differences. The AFC and FIFA would like the international referees to be more competitive in order to stay fit, but this did not happen in the Premier League.

The veteran referee of our country stated: The most referees in the Premier League were awarded to the Heydari brothers (Bijan and Payam) with 11 games, which is very little in 30 weeks. Naturally, the presence of expedient referees has caused many mistakes in the competitions. The refereeing committee also did not have an approach to play with the help of the World Cup referees, and Mohammad Reza Mansouri with 7 and Mohammad Reza Abolfazli with 11 referees had a small share in the Premier League. Alireza Ildrom received the most referees among the assistant referees with 14 games, which was one of the excellent assistant referees of this season. 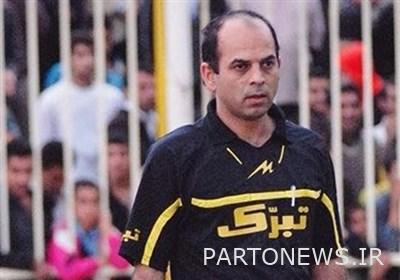 Soleimani noted that the referees were so scattered that the refereeing committee was forced to pay less attention to international referees and was given less play to keep the football teams satisfied. In fact, it should be said that three factors have not been considered in the arrangement of arbitration, first; The referees’ personality factor in relation to that game and the surrounding margins, second; Ability of referees to manage the leading and third game; Judges’ evaluation of their past performance.

In the end, he said: “According to the investigations, refereeing mistakes had no effect on the championship of Esteghlal and the fall of Fajrspasi and Shahr Khodro teams.” 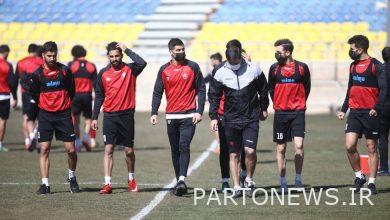 Training and recovery of whites after returning to Tehran 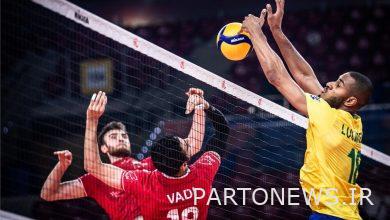 Lucarli: We were surprised by the performance of the Iranian national team against the United States – Mehr News Agency | Iran and world’s news 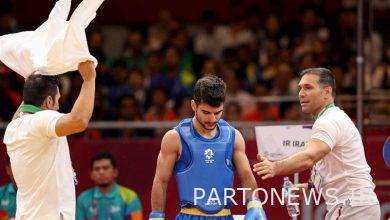 Ahangarian: The championship sticks to the defeat of the Chinese / I have a plan to participate in professional struggles 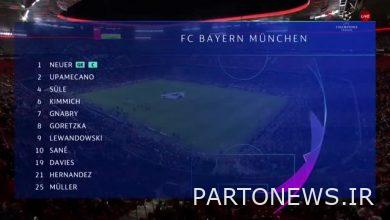