According to the Mehr news agency, citing the public relations of the wrestling federation, Gholamreza Takhti was born on the fifth day of Shahrivar, 1309, in a middle-class and religious family in Khani Abad neighborhood of Tehran. Apart from him, Rajab Khan had two other sons and two daughters, all of whom were older than Gholam Reza.

Gholamreza started playing sports as a teenager. At first, sport was a form of entertainment for him. At the very beginning, the idea of ​​becoming a champion tempted him for a while, but from the very youth who had just thought of going to the gym, he believed that exercise is necessary for the health of both body and soul.

In an interview, referring to the poverty and hardships of his teenage years, Shadervan Takhti says, “Although I was very interested in sports, I had to go in search of a job. I needed life, bread and water. I went to Khuzestan for a while and earned seven per day I worked for eight tomans. The world was at war (World War II), life was difficult.”

Takhti’s true acquaintance with sports and wrestling began in “Polad” club. He, who had seen many pits and powerhouses before and was fascinated by the humility and humility of ancient wrestling and sports heroes, went to Polad club for the first time in 1329, and because of the great interest and talent he showed towards wrestling, he was noticed by the late ” Hossein Razizadeh became the manager of that club.

Takhti himself says: “Razi Khan was a good person, if he showed someone and saw that he had a talent for wrestling, he would not give up. In the heat of the summer, we would get naked and wrestle every day from two o’clock in the afternoon for several hours. There was no hot water or bath. To lose weight, the wrestlers went to the treasury and filled the ship’s mattresses with cotton, but there was more dirt and debris than cotton.”

خبر پیشنهادی:   What did the aluminum players say after the match with Persepolis? The refereeing was against Rahmati's team

Takhti, who was sent to military service after returning from Khuzestan (Soliman Mosque), started his wrestling training again in the barracks using the opportunities and attention provided, especially the encouragement and support of the then Secretary of the Wrestling Federation. Takhti himself says about this: “When I participated in the big sports competition (French Cup) in 1328, I got a technical injury in the very first race. But the serious and hard training I undertook helped me to understand the truth of the struggle. Although I had the passion of victory in my head, I considered work and effort to be the beginning of victory.”

In this way, Takhti gradually pulled himself out of the losers with exemplary training and perseverance and finally became a member of the national team in 1330 in the sixth weight (79 kg).

Although he was still 21 years old, he became the world runner-up in the first freestyle wrestling competition of the world champions (Helsinki, 1951).

Takhti’s dazzling brilliance in the Helsinki wrestling competition, which took place in his first appearance in the world championships less than two years after he entered the domestic sports fields, above all represents Takhti’s unique faith, effort and determination, as well as talent and skill. He was great in the field of wrestling.

Jahan Pahlan Gholamreza Takhti is one of the most proud figures in the history of Iranian championship sports and the conqueror of the world’s top wrestling platforms, not only in Iran but also in the history of world sports. Despite the fact that 6 decades have passed since Takhti’s last appearance in the Olympic competitions (Toki, 1964) and 55 years since the death of Jahan Pahlavan, his name still shines among the most famous wrestling heroes of the Olympic competitions.

In response to domestic and foreign reporters who asked him, “What is the most valuable medal you have ever received?”, Takhti said: “The greatest reward and the greatest gift I received was not a medal or a gold or silver badge. The heart of a human being is more than It is worth thousands of gold medals and I know that thousands and thousands of righteous people of my country have saved a small place for me in their kind hearts.

In his last interview, Takhti considered himself to be one of the purest imams and said: I learned from Ali (a.s.) that one should stand up against adversity and strive for victory, and he went to the field with trust in God and won. And I did so and I won, but not the victory that I wanted because they did not let me and blocked my way.

Simplicity of life, contentment and self-restraint were among the distinctive features of Jahan Pahlawan. Despite the financial problems that plagued him, especially due to the pressures of the regime, he not only refused to accept the tempting offers that were made to him, but also magnanimously transferred his limited pension to the needy wrestlers.

Finally, Jahan Pahlavan Takhti died on January 17, 1346 at the Atlantic Hotel in Tehran.

LG showed off its 360-degree foldable display at CES 2023 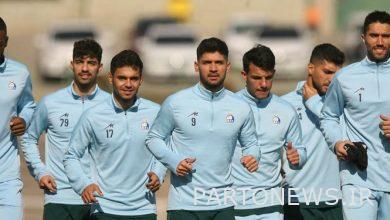 Next year, we will try to provide all the capacities to the federations honestly and fairly