According to the financial news report, quoted by the public relations of the National Bank of Iran, Abbas Shafiei, the chairman of the board of directors of the National Bank of Iran, in this conference, which was held with the presence of the members of the executive board, the heads of the bank’s information technology departments, managers of subsidiaries, activists and information technology experts. Shed, about the position of Melli Bank of Iran in the development of social commerce in the country, said: Since business is formed on the basis of trust, and the motto of Melli Bank of Iran has been based on trust for a long time. Therefore, it can be a suitable platform for business.

Ability to create any innovative service with yes

The head of the board of directors also added about the role of the Yes application of the National Bank of Iran in the development of social commerce: Today, the way to save economic enterprises and organizations is technology. On the other hand, the Yes application has unique features that have been able to replace many foreign applications, and its popularity shows that it has succeeded in compensating for many shortcomings.

Shafi’i stated: The high number of users and the considerable penetration of this application in the community, and on the other hand, the simultaneous provision of a messaging service and financial and banking services in one platform for the first time in the country, have made us witness the position of today.

The Chairman of the Board of Directors of the National Bank of Iran, stating that the combination of these advantages, the ability to create any innovative services through this application is created, and stated: Now a platform has been provided for businesses in Yes to many of their business activities. do in this context.

خبر پیشنهادی:   How much is the mortgage for a 100-meter apartment in the east of Tehran? + price table

Alireza Mahyar, member of the board of directors and vice president of information technology and communication network of the bank, also announced that today Yes has more than 10 million monthly active users and has grown 8 times compared to last year. He said: Since the establishment of Yes, one of our goals is to activate Saptai Bank’s services (informing customers’ transactions) were based on this application; In addition, personal financial management (PFM) was launched as a product in the National Bank of Iran for the first time in the country.

He added: Also this year, in addition to establishing the Arbaeen currency in the form of Dinar in Yes, two and a half million users have used the status notification system of this application, and so far they have received 3,800 national currency codes through Yes. .

Stating that some services, like the intelligent queuing system of the branches, have been recently launched in Yes, Mahiar continued: Now more than 500 branches of the National Bank of Iran are equipped with the online queuing system.

The member of the board of directors and the deputy of the bank’s information technology and communication network, emphasizing that the combination of financial services and social networks, such as the WeChat messenger in China, creates high added value for the beneficiaries; He said: Today Yes can be a platform economy and we are looking for Yes to become a platform for providing extensive financial services in the field of facilities, investment, etc.

خبر پیشنهادی:   4 obstacles to the progress of the national housing movement project - Tejaratnews

Also, in the introduction panel of Yes services, which was held with the presence of the heads of the general departments of retail banking and small businesses, banking information, the CEO of Sadad Datavarzi Holding and the CEO of Yes application, the capabilities of messengers in solving business problems, especially Small businesses and home businesses, the process of granting non-attendance facilities in Yes, the mechanism of assisting buyers and sellers in Yes stores, protecting the rights and security of users, the development strategies of the country’s social market with this application, etc. were explained.

In the end, Mustafa Radmard, the co-founder of Yes, while explaining the position of this application among the domestic messengers of the country and its ability to provide banking and financial services at the same time, announced the presence of 14 thousand channels and stores in Yes and the way forward for this messenger. Explained for the development of innovative services in the field of social payment and micropayments.

The country's loss of 7 cents per cubic meter of gas delivered to petrochemicals/methanol plants turns gold into copper.

The director of resistance radio was appointed

The unveiling of the teaser of the Iranian insurance system 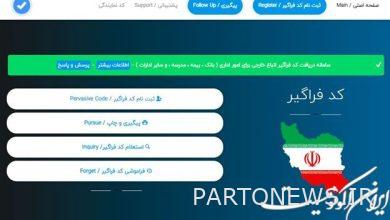 How can foreigners benefit from complete banking services in Iran?