Fars News Agency – Cinema Group: Until recently, there was only one problem called “Western cultural invasion” and all efforts were focused on combating this resistance of the colonialists, but unfortunately, especially in recent years and with the expansion of cyberspace, a significant part of society’s body on a significant scale They have been pushed in this direction, which, of course, is the product of the same cultural invasion that is now in the service of the invasion. This time the discussion is about artists and celebrities who today, no longer needing the domestic media, who were previously bound by many moral and physical issues, have themselves become extremely inappropriate role models for society, especially for the younger generation.

Every day, we see celebrities in cyberspace and in events who show themselves with appearances that have nothing to do with culture, traditions, temperaments, norms and norms of Iranian society, and willingly or unwillingly attract a much less experienced group. They are fascinated.

The stunning and embarrassing appearance of this so-called “lifestyle” was seen this year in the darkest period of the Cannes International Film Festival. From the couple of actors on the red carpet, who even violated their dignity and that of their Iranian and Persian-speaking families with all their shameful and modest backgrounds, and displayed their most private family honor in a multifaceted way on the red carpet, to such clothes and The immorality of these and all the other celebrities who went to this period of the Cannes Film Festival all sounded serious alarm bells for those who are worried about the future of the generation that until yesterday modeled the artist with shame and modesty and today in the They showcase the exterior of their country.

Therefore, this warning is very serious. For the authorities, institutions, bodies and even the three forces that should take this warning seriously. Because we all know that so much that a celebrity can even impress us with carelessness and inappropriate clothing and inappropriate clothing of innocent and inexperienced teenagers and teenagers. It is vulnerable, it can be very tempting and receptive.

Here, we owe it to ourselves to protect these flourishing youngsters, and certainly one of the ways to protect and care for young people and adolescents is to strongly discourage the immoral behavior, cover-ups and immoral representations of this celebrity who have turned their backs on the destruction of young people. Relevant institutions and organizations must regulate the inappropriate behavior of celebrities, and the judiciary must deal severely with any behavior, cover-up, and cover-up that is contrary to the norms of society.

This problem has been felt by a significant part of the society and part of these concerns has been directed to a scan in the “Fars Man” system of Fars News Agency, which wants to deal decisively and prevent this style of dressing celebrities. This scan is entitled «Adopt a law to regulate the coverage and behavior of artistsIt is registered and the number of signatories is increasing every day. The text of the scan is as follows:

“The Iranian regime has taken the title of the Islamic Republic with it and has enriched its thousands of years of civilization with the spirit of Islam. Every Iranian must be a full-fledged mirror of this pure identity; An identity that is associated with decency, politeness and culture and attracts the admiration and attention of every audience.

خبر پیشنهادی:   The sixth anniversary of the unveiling of the international virtual museum of children's art in Urmia

Images of famous actors of cinema and theater at Cannes 2022 with that ugly cover can not show the honor and shame of Iranian culture in front of foreign cameras.

Actors and actresses who rose from the soil of Iran and were proud of it and breathed its air into it, today, when they step beyond the borders, they search for their identity in the Iranianization of their Iranianness and choose behavior and speech that result in adding Sadness on the hearts of genuine Iranians and true Muslims and intoxicating joy for their enemies.

Now that it is clear that leaving space free does not lead some people to understand their human identity, and because of this, many cultural and human damages have been inflicted on the Iranian nation, it is certain that serious and stubborn supervisory laws should be enforced. Establish the behavior of all artists living in Iran and influencing people in the community.

“As a part of the Iranian society, we demand purposeful, stubborn and serious monitoring in this direction.”

Holy Mashhad is the tourism hub of Islamic Iran

The history of Iran does not start from the Achaemenids! 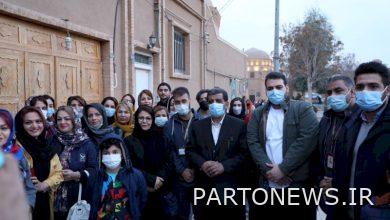