The historical and famous Goharshad Mosque, which is nestled in the embrace of the pure Razavi shrine and has given breath to the dome and garlands of Hazrat Saman al-Hajj (a.s.), is the largest mosque in this complex, which due to its age, architectural style and artistic beauty The most important works and monuments of Islamic Iran are related to 623 years ago.

Goharshad Mosque, with its unique grandeur and special charm, is one of the religious, historical and cultural attractions of the pilgrims’ and nearby people’s interest, and those who have come from far and near to visit Imam Rauf’s shrine, if possible, spend a few moments in the courtyard. The spiritual attraction and architectural beauty of this mosque will disappear.

Goharshad Grand Mosque was started and completed after 12 years in 821 AH by the order and financial support of “Goharshad Begum”, the wife of Shahrukh Timuri, and with the design and execution of Master Qavamuddin Shirazi, the most prominent architect of the Timurid era.

The magnificent building of this mosque consists of seven naves, four porches, two rosaries, a courtyard and a turquoise dome. The dome and minarets of this mosque are decorated with glazed bricks. Unlike other mosques, the dome of the mosque is built in a square shape on a rectangular porch. Also, the half dome is covered with white plaster and paintings are drawn under the dome, and the entire exterior is decorated with mosaic tiles.

The beautiful minarets of this mosque are also 43 meters high and there are inscriptions on them. The interesting thing about the minarets of the Goharshad Mosque is that they are built on the ground and they are raised next to the porch.

The head of the National Register of Historical, Cultural, Intangible and Natural Monuments of the General Directorate of Cultural Heritage, Tourism and Handicrafts of Khorasan Razavi said about this mosque: Many of the spaces that remain in the holy shrine complex were built during the Safavid era and after. And Goharshad Jame Mosque is related to before this period and is one of the oldest existing spaces of this complex.

The location of the Goharshad Mosque facing the Qiblah and the emphasis on performing prayer in this holy place has provided the pilgrims with a suitable and peaceful atmosphere.

Mahmoud Taghraei added: Goharshad Jame Mosque is one of the architectural masterpieces of Iran. This mosque, with a very large area of ​​about 9,400 square meters, is located in the complex of buildings of the holy shrine and on the Qibla side of Imam Reza’s holy mosque.

The head of the National Register of Historical, Cultural, Intangible and Natural Monuments of the General Department of Cultural Heritage, Tourism and Handicrafts of Khorasan Razavi stated that the Goharshad complex is considered one of the largest mosques in Iran and added: The general plan of the mosque is like most mosques of the Timurid era in the 8th century. and 9th AH, it has four porches, the Qibla porch of this mosque is very large and connected to a high and magnificent dome, and there are 2 brick and tiled minarets with a height of 43 meters on both sides of this porch, which is known as the Maqsoorah. which has given a special beauty to the porch and the mosque.

He stated: The beautiful, tall and wide dome of this mosque is one of its unique features. The height of this brick dome is about 41 meters and its circumference is about 85 meters. This dome with these specifications is considered one of the largest historical domes in Iran.

Taghraei added: One of the most important elements under the dome of this house and on its Qibla side is a very beautiful and large tiled altar, which is unique in its kind.

The head of the National Register of Historical, Cultural, Intangible and Natural Monuments of the General Department of Cultural Heritage, Tourism and Handicrafts of Khorasan Razavi said: The designer of various decorations, precise architectural fit, stability and strength and calculated use of all Iranian Islamic arrays and geometry, an impressive mosque. and has made it full of peace.

He said: seven-color marqa tiles, many inscriptions with beautiful lines of Tholt, Kufi, Naskh or Nastaliq related to different times everywhere in this huge building have turned this mosque into a museum of Islamic arts, calligraphy and calligraphy.

Taghraei continued: Goharshad Grand Mosque complex, as a work of endowment, has had a consistent and stable management and has been able to survive and continue for more than 600 years.

He added: During the Timurid era, with the help of prominent Iranian architects and artists, including Qawamuddin Shirazi and his students, and with the support of people who had adequate financial resources, many lasting buildings were built in the cultural Iran of that time. Beautiful and luxurious buildings were remembered in cities such as Samarkand, Herat, Mashhad, Tabriz, Yazd, Torbat Jam and other cities, most of which have been restored and turned into tourist places.

The head of the National Register of Historical, Cultural, Intangible and Natural Monuments of the General Department of Cultural Heritage, Tourism and Handicrafts of Khorasan Razavi stated: Although Goharshad Jame Mosque also has the same pattern of four porches in terms of overall design, there are 2 minarets on both sides of the Qiblah porch. , the dome connected to it and its large size and overall geometric proportions are unique in Timurid era architecture and in the history of Iranian architecture.

Taghraei added: The choice of this place to build this great mosque during the Timurid era was in line with the way that the architects of this period expanded those complexes by constructing new buildings alongside other old buildings. The construction of the Jame Timuri Mosque in the tomb complex of Sheikh Ahmad Jam was also built with the same plan.

He said: Goharshad Grand Mosque has been renovated and repaired many times in the centuries after its construction and during these 600 years. In several existing inscriptions that were installed on the building in the following centuries, the restoration of some parts of this mosque is mentioned.

He stated that the tiling of the dome of the mosque has been replaced and rebuilt in several stages in the past 150 years, adding: Very old pictures of this dome show that the design of the tiles has been changed at least three times and that accidents such as earthquakes and fires have occurred. Burning, as well as the wear and tear of the materials and the heavyness of the mosque structure, have made these restorations inevitable during the building’s more than 600-year lifespan.

Elaha Mehboob added: The documents available in the Astan Quds Document Center cover a wide range of topics, including the provision of fuel for lanterns and torches, monthly reports of income and expenditure, employee summaries, mosque repairs, payment of the price of mosque goods, lighting matters, and obligatory payments. The staff, the office of the watchman, various jobs such as Musharraf, hafiz, muezzin, Farash, taking care of various services, guarding the mosque doors and sheds, Chiragchi, Farashbashi, Kafichi, Sadr al-Hafaz, Ruza Khan, Saqqa, cook, shoemaker of the mosque, Pishnamaz, the state of the office Endowments, leases, incomes and expenses of endowments, trustees and other employees of endowments.

The head of the Historical Documents Department of Astan Quds Razavi Library stated: The oldest document in which the Goharshad Mosque is mentioned is related to the lunar year 1017 and the era of Shah Abbas Safavid.

Mehboob added: The types of documents introduced include documents, justifications, diaries, and calculations, most of which are 15 x 20 cm in size.

The Goharshad Mosque, which was built by the efforts of a polite and knowledgeable lady, has experienced various incidents in its 600 years of life, the most important of which is the incident of July 21, 1314 and the attack on this mosque during the reign of Reza Shah Pahlavi, who protested the forced The wearing of Shapo’s hat happened about 6 months before the law of discovering the hijab.

This mosque is one of the largest mosques in Astan Quds Razavi and the oldest court in the Holy Shrine of Imam Reza (AS) belongs to this mosque.

Even now, this building receives a large number of pilgrims and worshipers of the holy shrine of Razavi every day.

Ideological political actions of the capital; From holding insight courses to sending to high places 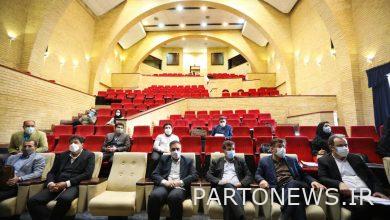