Farsman group; In the past few weeks since the announcement of Fars journalists’ plan to follow up on my Fars campaigns, we have received many calls from the audience who wanted to prioritize their demands. Rest assured that all the campaigns that get enough signatures will be put on the news agency’s agenda. Of course, our main support for pursuing any campaign is your support, and the more signatures a campaign has, the more bargaining power we have with the authorities.
Today, we have selected 5 campaigns out of thousands of campaigns registered in the Farsman system, and we want to tell you about the plans of Fars journalists to follow up and bring them to a conclusion.

Lessons from the Qur’an is one of the popular programs of the national media, which are watched by people of all ages and benefit from the religious teachings of Hojjat al-Islam. For years, this program has been aired on Channel 1 on Thursday nights. Now the audience of Farsman is requesting that the interface of the deaf be present in this popular program so that they too can use these Quranic tips.

The Arts and Media Service will share this request with the creators of this program. Also, if the number of signatures increases, we will follow up the matter with the manager of One Cima network so that this popular program can also provide water to deaf people who are interested in religious teachings. 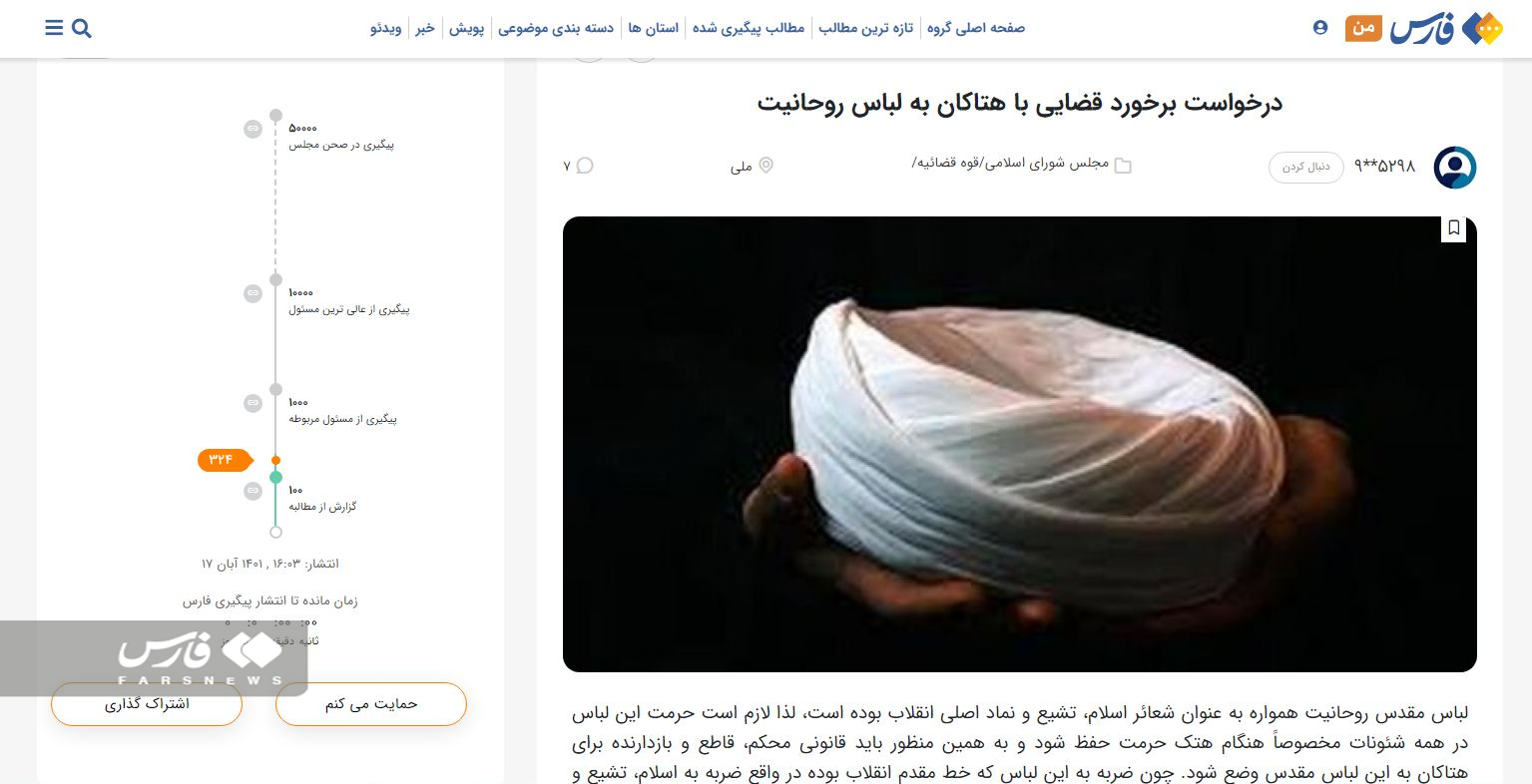 Request for judicial action against those who wear clerical clothes

After the rioters did not succeed in bringing the people together, they started a heinous act and insulted the clothes of some clerics. This behavior, which was welcomed by the anti-revolutionary media, quickly provoked the negative reaction of the people. A group of audience members recorded a joint campaign with the theme of requesting judicial action against those who dress up as clerics.
The recorder of this campaign wrote: “The sacred dress of the clergy has always been the ritual of Islam, Shiism and the main symbol of the revolution, so it is necessary to preserve the sanctity of this dress in all affairs, and for this purpose, a strong, decisive and deterrent law should be passed for those who commit this “The holy garment should be put on.”
The social service will go to the police force to follow up on this demand, to find out what they have done with those who wear clerical clothes and what plans they have to prevent this action. The cultural service will also ask experts why some people resort to such behaviors.

خبر پیشنهادی:   The unique historical and cultural capacities of Zanjan should be introduced at the national and international level 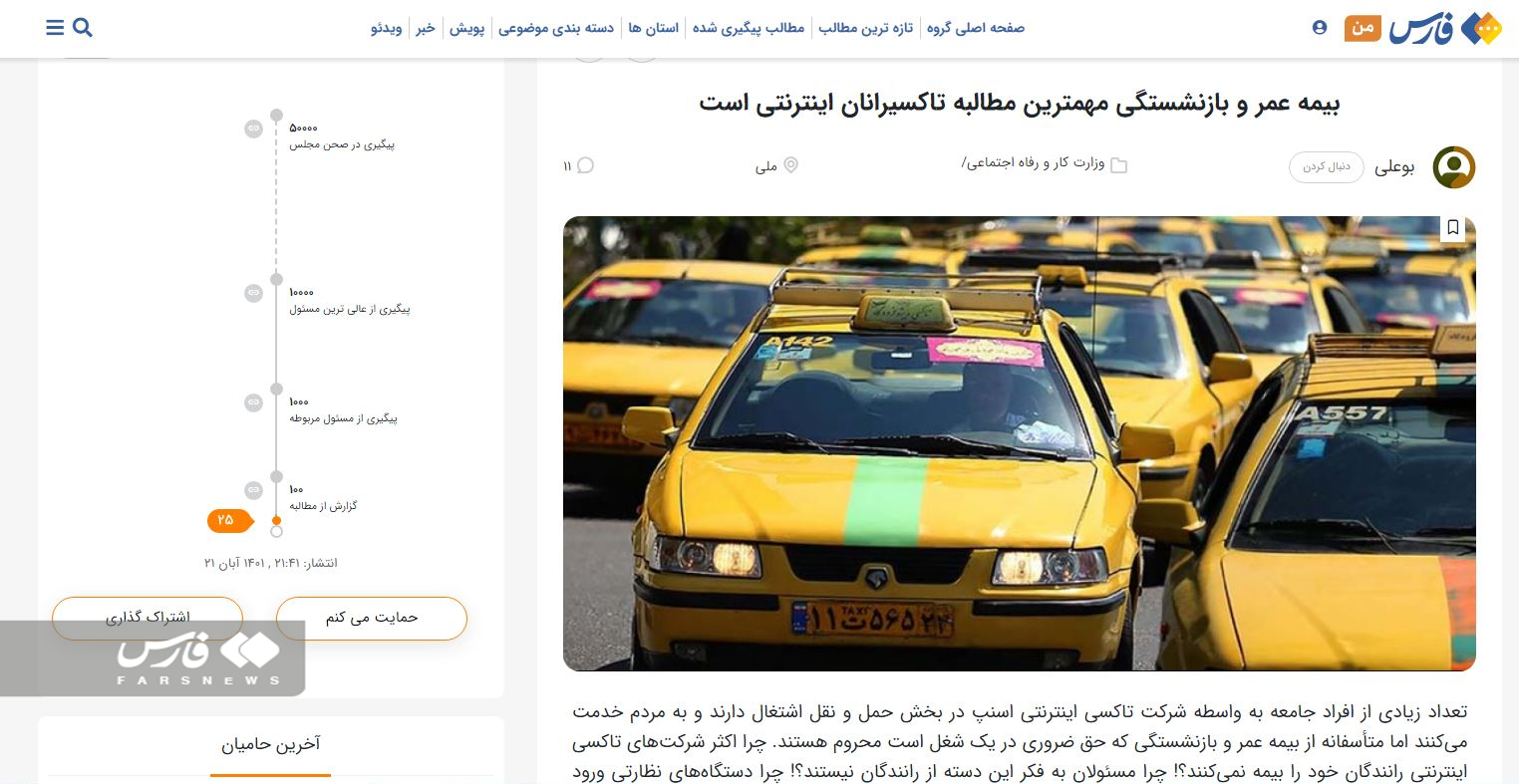 Life insurance and retirement, the most important demand of internet taxi drivers

Internet taxis are relatively new phenomena that have emerged since the rise of internet platforms. But there is still no complete consensus on the legal issues of these jobs. Whether the relationship between the drivers and the service company is considered an employment relationship or not is a complex legal issue all over the world. Now, online taxi drivers have registered a campaign and requested that at least life insurance and pension be established for them. In the text of their campaign, it is stated: “A large number of people in the society are employed in the transportation sector through internet taxi companies and serve the people, but unfortunately, they are deprived of life insurance and retirement, which is an essential right in a job. Why don’t most internet taxi companies insure their drivers?! Why don’t the authorities think about this group of drivers?! Why don’t surveillance devices come in?!”
In order to follow up on this matter, Fars News Agency’s social service will first ask the decision of the managers of the Ministry of Labor and Social Welfare in this regard. Also, if the necessary signatures are obtained, the political service will also enter the story and will bring the demand of the drivers to the ears of the MPs. 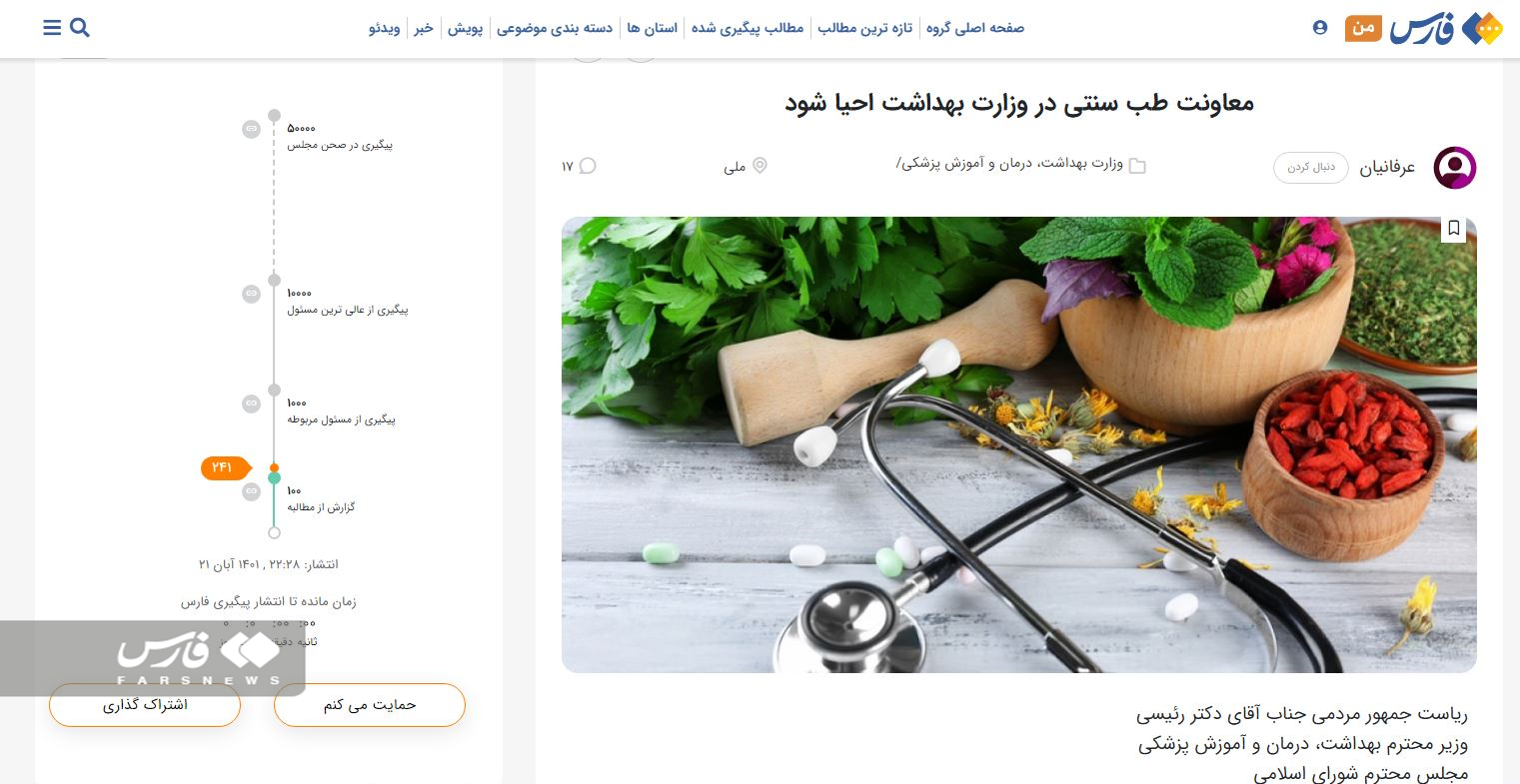 A campaign for the revival of the deputy of traditional medicine in the Ministry of Health has been registered in the Farsman system. The registrar of the campaign wrote: “Based on the announcement of general health policies and health system strategies, it has been emphasized that traditional medicine should be placed next to modern medicine in view of its ability to prevent and promote a healthy lifestyle in the Ministry of Health and health system strategy. take In 1392, based on the approval of the then government, the deputy of traditional medicine was established in the Ministry of Health. But unfortunately, the minister of health of the previous government in 2014 canceled this deputy position, contrary to the wishes of the nation and the scientific community, and reduced it to the management level.

The health reporter of the social service will follow up on this matter from the Ministry of Health. Also, interviews with experts in this field will be published to tell about the importance of traditional medicine alongside modern medicine for the treatment of diseases. 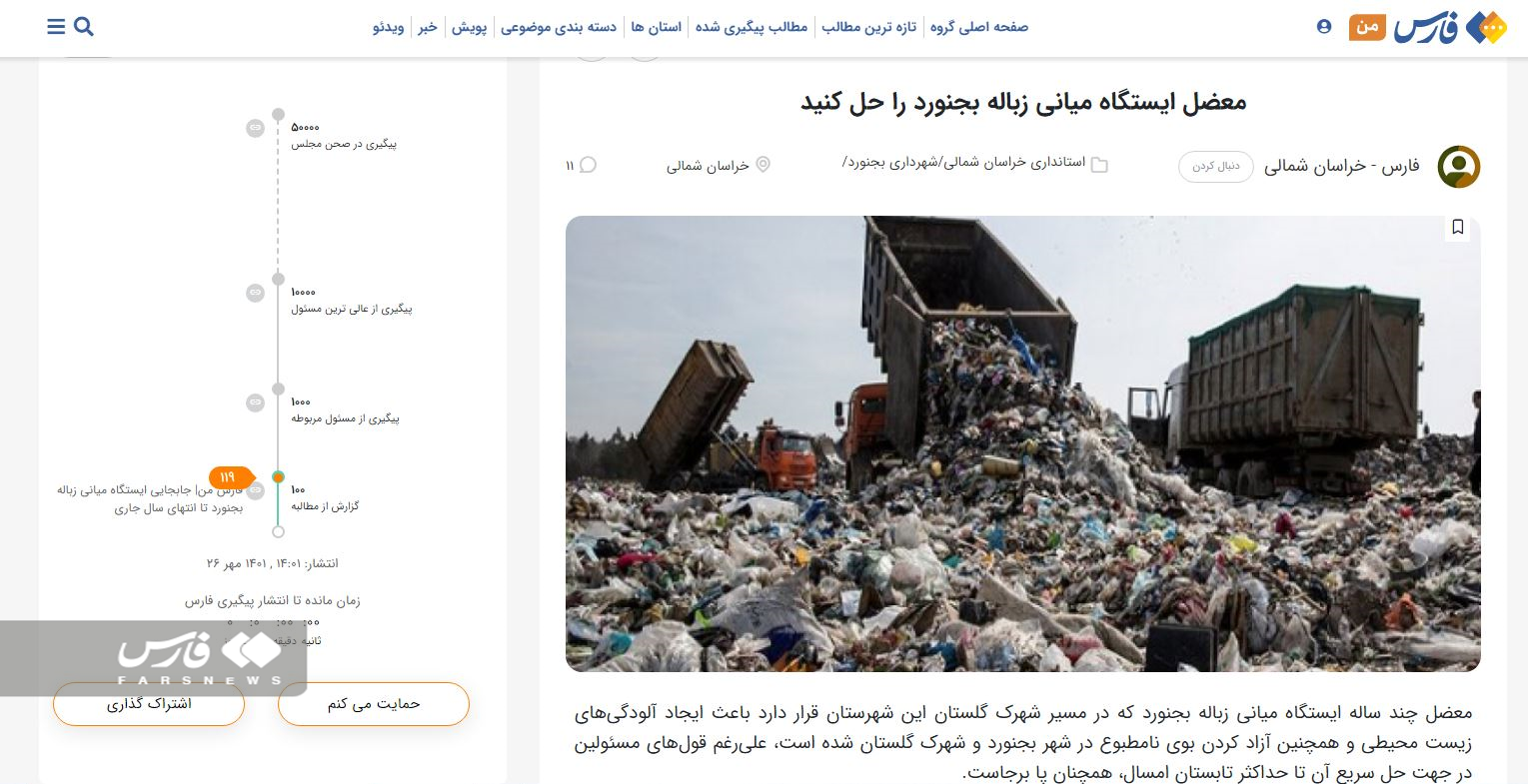 The problem of the citizens of Golestan town of Bojnoord city is the bad smell and environmental pollution of the intermediate waste station of Bojnoord city, that’s why they registered a campaign in the Fars Man system. Supporters of the campaign say: “This multi-year problem is still standing despite the officials’ promises to solve it quickly by the summer of this year at the latest.”
The provincial service of Fars news agency will go to the municipality of this city to follow up on the solution of the problem, and then raise the problem with the environmental department of the city, and if the problem is not solved, it will follow up the matter from the higher authorities.

If you have any requests, please let us know. My Fars system is still welcoming you, and Fars journalists also put high-priority campaigns on their agenda.

The 34th theater festival of Isfahan province has ended 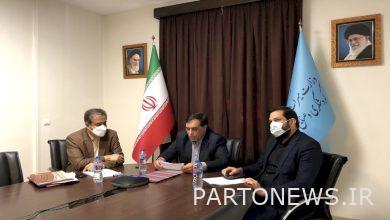 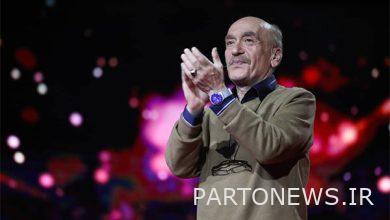 How did “Tak” prepare for Nowruz 1401 / How did Dariush Kardan accept the performance? Mehr News Agency Iran and world’s news 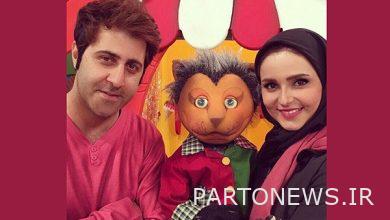